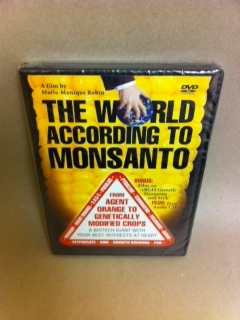 The World According To Monsanto DVD

The World According To Monsanto

A Film By Marie-Monique Robin

Monsanto’s controversial past combines some of the most toxic products ever sold with misleading reports, pressure tactics, collusion, and attempted corruption. They now race to genetically engineer (and patent) the world’s food supply, which profoundly threatens our health, environment, and economy.

Combining secret documents with first-hand accounts by victim, scientists, and politicians, this widely praised film exposes why Monsanto has become the world’s poster child for malignant corporate influence in government and technology.

Also a speech by Jeffery M. Smith, “Don’t Put That in Your Mouth”

You’ll want to stop eating genetically modified foods after you learn how they are linked to toxic and allergic reactions, sick, sterile, and dead livestock, and damage to virtually every organ studied in lab animals.