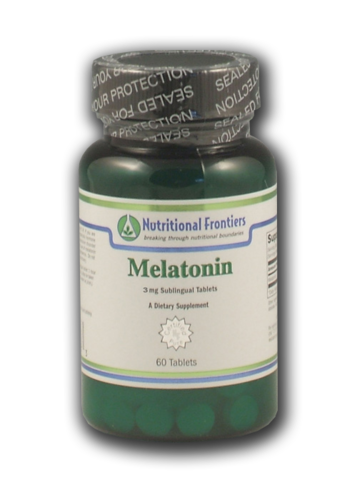 Melatonin, available by Nutritional Frontiers, contains only the purest grade melatonin and is now available in 1 mg or 3 mg sublingual tablets and 3 mg time-released tablets.

Suggested Use: As a dietary supplement, take 1 time released tablet before bed, or as directed by your health care practitioner.

Warning: If you are pregnant or nursing, consult your health care practitioner before taking this or any nutritional product.

Melatonin is a natural hormone nutrient that is synthesized from the amino acid tryptophan by the pineal gland in the back of the brain.

Most of the research on melatonin has focused on its role in maintaining normal sleep/wake rhythms. The rise in plasma melatonin levels is thought to be responsible for bringing on sleep. Nocturnal melatonin production is highest in children and begins to decline from adolescence on until it is virtually absent in the elderly.

Melatonin supports normal immune function by helping maintain the activity of circulating natural killer cells and it has also been found to function as an antagonist for stress induced immune suppression.

Melatonin is perhaps the most important physiological anti-oxidant in the brain due to its lipid and water soluble properties as it can freely cross the blood brain barrier.