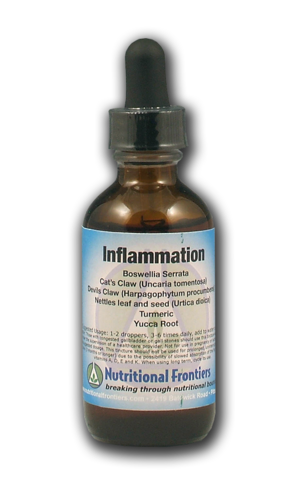 Inflammation Tincture is a combination of herbs which may help support conditions associated with inflammation and pain.

Caution: Those with congested gallbladder or gall stones should use this tincture with caution and under the supervision of a healthcare provider. Not for use in pregnancy or lactation. Do not exceed suggested dosage. This tincture should not be used for prolonged, uninterrupted periods of time (3 months or longer).

Inflammation Tincture is a combination of herbs which may help support conditions associated with inflammation and pain.

Boswellia Serrata is found throughout western and central India. It is used in Ayurvedic medicine to target conditions like arthritis, asthma, and colitis. Like several other herbs in this formulation, Boswellia does not possess the unpleasant gastric side effects exhibited by anti-inflammatory drugs. The mechanism of action by which Boswellia improves arthritis is thought to be improved blood supply to the joints and the prevention of connective tissue breakdown.

Devil’s Claw (Harpagophytum procumbens) has a long history of being used by herbalists to help people with osteo and rheumatoid arthritis. Devil’s claw is indigenous to South Africa. Its actions in helping arthritis are thought to be due to harpagosides, which are glycosides found primarily in the secondary tubers of the plant. Unlike NSAIDs (non-steroidal anti-inflammatory drugs), devil’s claw does not damage the stomach lining. In fact, this herb has been used as a digestive tonic.

Turmeric (Curcuma longa) is a yellow culinary spice with numerous medicinal benefits. In addition to being an anti-oxidant and cholagogue, turmeric has potent antiinflammatory actions. Turmeric inhibits the formation of the pro-inflammatory mediators thromboxane and prostaglandin. Additionally, it does not interfere with beneficial prostaglandin production and therefore does not harm the stomach lining like pharmaceutical anti-inflammatory agents.

Urtica dioica, commonly known as stinging nettle, is a common and widespread weed in temperate regions of Asia, Europe, North America, Japan, Australia, and South Africa. The plant is covered in stinging hairs that release an acrid fluid which causes a temporary burning or tingling sensation on the skin. All parts of the plant are useful to humans: the plant stem has fibers that have been used to make cloth, the leaves may be cooked and eaten as nutritious greens, and the leaf, root and seeds have a rich history of medicinal use by herbalists worldwide. Chief among its indications are allergic rhinitis, inflammation, hormonal disorders, and urinary tract disorders.

Yucca root is indigenous to the southwestern USA and parts of Mexico. This desert plant contains saponins which may counter chronic joint inflammation. Herbalists have also used yucca to treat dandruff and prostatitis. In addition to the steroidal-like activity of the saponins, yucca is also thought to be anti-fungal and anti-bacterial. Yucca root has been used as a soap or shampoo due to its natural foaming properties, hence its common name “soapweed.” Yucca should not be used for prolonged, uninterrupted periods of time (3 months or longer) due to the possibility of slowed absorption of the fat soluble vitamins A, D, E and K.

Inflammation Tincture Technical Flyer
Save this product for later